A musician stands at the gate of the year

Well friends, isn’t 2021 a curious time to be a musician? I don’t know about you, but my social media is awash with friends, peers and colleagues in a deep state of worry. Lost income, opportunities gone, plans ruined, careers paused, and a sense that the music industry itself is adrift in a vast sea of uncertainty, looking like it might well drown completely. The other week I went through my 2020 diary and added up all my lost earnings from gigs cancelled, and it was a particularly dispiriting exercise. Even as a Christian, whilst we may know, factually, that the LORD is in control, nevertheless, when the life which we’ve been on a trajectory towards seems to be disappearing, it can be hard to stay reassured. If you’ve newly graduated or are about to graduate, it’s not a promising picture, with even the established pros floundering around trying to pick what scraps of viable work are still there, trying to make things work with online gigs and tipjar paypal donations. Is being an online busker the best we can hope for in the next wee while? What’s going to happen? Will the gig venues still be there? Will the festivals happen again? Whose fault is it? Was our music degree a total waste of time? Can we still become the musicians we’ve trained to be? We don’t know. It’s not clear. It’s deeply uncertain.

And so, the only thing to be done is to go back to the one place where we can have certainty, to the words of the LORD Himself.

How should we judge time well spent?

If we are tempted to think that a music degree has indeed been a waste of time then we have to ask, what, according to the LORD, is time poorly spent, and time well spent?

Well, in the parable of the sower and the seeds in Matthew 13:1-23, Jesus provides an insight into all people who have ever lived in all possible walks of life! So we know it’s going to say something about us musicians in 2021.

As for what was sown on good soil, this is the one who hears the word and understands it. He indeed bears fruit and yields, in one case a hundredfold, in another sixty, and in another thirty.

Isn’t it extraordinary that Jesus can describe what an entire lifetime might look like in one image?

Friends, in answer to the question, 'is this music degree a waste of time?', Jesus replies with, 'are you being good soil?' That’s His criteria. And of course what this means is that how you live as a music student is more important to Jesus than what you do. And His point is that we ought to be fruitful in living for Him.

If, during the course of your degree, you have grown in your love for the LORD and your understanding of His gospel, and have seen fruits of that in your life (however small), then, according to Jesus’ criteria, those years couldn’t have been better spent!

I think we can confidently say that the LORD would rather you lived your life in poverty and career failure, and yet grew in Christian character, than that you allowed the thorns, the 'cares of the world and the deceitfulness of riches', to choke the thing in you that truly matters.

How to live in the land?

That said, it’s worth thinking through our specific situation too. What we do is still important. And the LORD does indeed care about that too, as he knows and cares about the sparrows of the air and the hairs on our head. So, as we try to make sense of the lay of the land, how does Scripture give us certainty about the situation the music industry is in?

I’m sure we all remember a few months ago when some pictures circled the internet that seemed to be encouraging performing artists to retrain: so-and-so’s next job could be in computing, they just don’t know it yet, etc. Now, without making any comment on that itself, what was interesting was the rage that that unleashed from performing artists on social media. Musicians and others were, understandably, indignant at the suggestion that what they had worked so hard to be able to do wasn’t valued or viable in society anymore. It was as if something was fundamentally incorrect about reality; that a viable music industry should exist, and if it doesn’t then somebody has deliberately done something (or omitted to do something) to remove or suppress it. For it to disappear seems so wrong.

Well friends, how do we make sense of that? Is that true? I remember during my years at music college it was, unsurprisingly, implied that music was absolutely worth doing and that there would and should be a place for it in society. And I suppose, if one’s chief identity characteristic is one’s identity as a musician, it makes sense that the world would accommodate that. Whereas now, with the world looking as though it might not, the sense that people’s very identities, their very selves, are being de-valued is keenly felt.

I think the question for us here is NOT whether music is valuable and worth doing. It absolutely is! (There are so many wonderful resources on the Music Network website that demonstrate to us how worthwhile music-making is for a human being, for so many reasons. I’ve found Becky Chevis’s articles especially enlightening.)

No, I think the question we need to ask is: 'Should we be surprised when the world looks like it might not provide a place for me as a musician?' And I think the answer to that, friends, is… 'No. It’s not a surprise.' I’ve been reading through Genesis again this month, and I was struck by how often famines, droughts and disasters came and went with people forced to totally change the direction of their lives; to drastically uproot and move:

Now there was a famine in the land. So Abram went down to Egypt to sojourn there, for the famine was severe in the land.

Now there was a famine in the land, besides the former famine that was in the days of Abraham. And Isaac went to Gerar to Abimelech king of the Philistines.

I would suggest that this is indicative of the fundamental state of the world we still live in. We might be lucky enough not to live in a culture where a surprise famine is an imminent threat (in fact, isn’t it quite miraculous how well-stocked our food suppliers have been?), but we certainly live in a world where a surprise disaster has the ability to totally change normal life. That’s precisely what Covid is, isn’t it?

Again I saw that under the sun the race is not to the swift, nor the battle to the strong, nor bread to the wise, nor riches to the intelligent, nor favour to those with knowledge, but time and chance happen to them all.

Friends, our beloved music industry is not some sort of special immune thing. It is as susceptible to disaster as any realm of life, probably more so than most. For most of human history, life has been lived hand-to-mouth, one disaster away from ruin. Perhaps, for us, this is our first taste of a proper ‘famine’ experience? Perhaps we’ve just been very lucky that it hasn’t happened before? So lucky that it’s led us to believe that music industries will last forever...?

Friends, don’t mishear me. I’m not suggesting that what’s happening is at all good. It’s not. It’s deeply disappointing. I don’t think we should like it, but I also don’t think we should be surprised. Scripture teaches us (with certainty) to expect difficult seasons in life, sometimes difficult seasons that encompass all of society. In many ways, what’s happening now is the same old story with different particulars; a story that has always been true irrespective of politics, economics, etc. Of course, we are absolutely free to try and help those situations: You can campaign for support and do anything you can to help the music industry survive, as is your right. Seek the good of the kingdom in which you live. But do so from a place that has made peace with the world as it actually is. I don’t think this need be a discouragement, but hopefully a reminder of perspective. Whereas many of our peers will see what they’ve been living for disappear, we don’t need to do that. What we’re living for still remains.

Remember it is still the LORD’s world. Remember He cares deeply for your good in a way that transcends whether you get to become a professional musician or not. Romans 8:28 can be a cliché but it’s true. If you’re endeavouring to be good soil, then whatever happens to you in this temporary place will certainly be for your ultimate good as He knows you need it.

So, what can we actually do as we step into the year? Thus far, I’ve tried to say what Scripture tells us with certainty, so anything from now is just my thoughts. Nevertheless, here are a couple of brief reflections:

Brothers and sisters, sadly I can’t promise you a career in music, although I am sure many of you reading this will indeed find one. If you get the chance, work as hard as you healthily can; if you don’t, that’s honestly fine. Overall though, from one musician to another, might I humbly suggest that the best course of action is indeed just a clinging to the basics: Our world is fallen, but Jesus is going bring about a vast and wonderful new one; and the best use of your earthly life today is to allow Him to gradually bring about a new creation in you too (be good soil). Dwell deeply in Him; it’s His simple truths that make sense of any area of life and cast out the fear that can so often come upon us. Take heart, go farther up and farther in to Him, and everything else will fall into place.

'Go out into the darkness and put your hand into the hand of God. That shall be to you better than light and safer than a known way.' 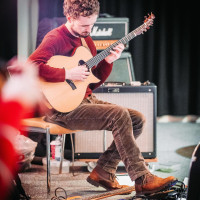 A (twice) graduate of the Royal Conservatoire of Scotland, Chris is a Glasgow-based guitar player that spends part of his time as a freelance musician and part of his time working with UCCF. …

View all resources by Chris Axford-Amer