I was a Christian. I was a music student. But if you’d asked me what the two had to do with each other you would have received a blank look and a confused ‘ummm….?’ I perhaps could have got as far as noticing that music is used in church, or realising that music could be used to help my evangelism. Cue evangelistic programme notes for the choir I directed (!) or an organ recital plus testimony. But as for how music itself connects with Christian faith I regret not thinking it through much sooner.

Jeremy Begbie’s 22-page book, Music in God’s Purposes, would have gone a long way to help. His first chapter, Overture, persuades the reader of why we should think this question through at all, noting music’s pervasive power in people’s lives. He then sets out a brief definition of what music is and does, before noting two opposite approaches to the question. On the one hand the Romantic idolises music believing it connects us to the divine; on the other hand the Puritan denigrates music and is suspicious of its power. Chapter 2, Main Themes, lays out six ideas that form the basis of a Christian understanding of the created world before Chapter 3, Counterpoint, relates those themes to music. Begbie helpfully summarises this main section as follows:

The pervasive order of the world, which speaks of God’s goodness, provides the basic setting in which the musician works. The contingence of the world reminds us of the hazard of idolising music and the musician. God’s faithful love towards creation…removes any possible hesitancy we might have about being involved in an activity which is first and foremost an interaction with the physical world. The musician’s calling…is to discover, respect and develop what he or she has received in creation, and to form out of the disorder of the world a richer order. All this is to be carried out with and for the sake of others. Above all, the musician finds his fulfilment…when he is bound to Christ by the Spirit, for in Him our humanity has been re-made and all creation been set right, and thus in Him the relation between the two healed and restored.

The final chapter, Coda, makes a series of direct appeals for action.

While a little dated (the controversy in the church over rock music anyone?) Begbie’s book is a helpful primer to give some categories to think in and some thoughts to chew on. Its strength and weakness is its length. It’s short enough to read in half an hour or so, clearly covers some essential ground and has some brilliant, pithy comments. Particular highlights for me were Begbie’s one paragraph dissection of the selfishness of the ‘misunderstood genius’ trope and his unpacking of how making music teaches us how to relate well to one another.

However, given its brevity the book often raised more questions than it answered. That’s not necessarily a bad thing, of course, but something slightly longer would have allowed Begbie to defend his position more thoroughly. I was particularly left with a question mark over why he had chosen the six main themes he did, and why not others. While all clearly came out of a Biblical understanding of the story of redemption, it may have been helpful to more explicitly relate them to a biblical-theological account of creation-fall-redemption.

Overall, however, I wish someone had put this in my hands as a first-year undergraduate. It would have persuaded me of the worth of my subject, fired a desire for Christian engagement in music, and given me some basic tools for thinking clearly. I’d certainly recommend it – that is, if you can get your hands on a copy; sadly it is currently out of print.*

* [From ed:] Happily, Jeremy Begbie himself has given us express permission to distribute a photocopied version of the book to any students who desire to read it. Therefore if you are keen to do so, please email Music Network co-ordinator Tom Chevis at tchevis@uccf.org.uk and he will be able to pass it on to you. 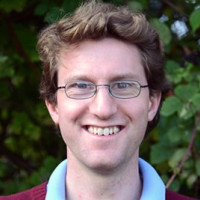 Ali has been sharing the gospel with students in Oxford ever since arriving at Exeter College in 2007 to study music, after which he worked for his church and subsequently for UCCF, as a CU staff …

View all resources by Ali Reid